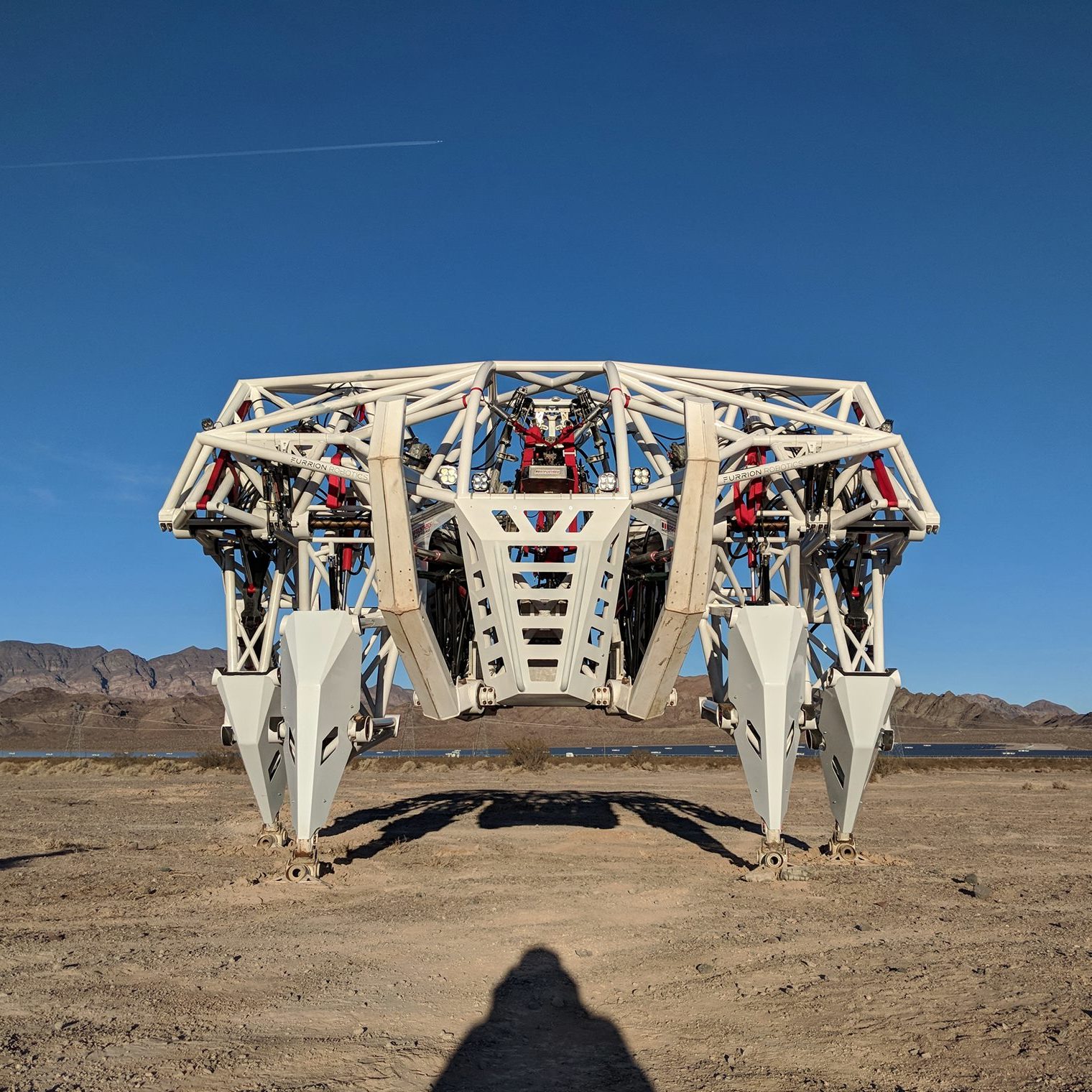 Incubated in the eatART Lab, Prosthesis was originally an independent art project by Jonathan Tippett, co-creator of The Mondo Spider. The project has since evolved into ExoSapien Technologies, a for-profit company with the vision to create a world in which large scale powered exo-suits are commonplace.

The concept dates back to 2006 when Jon envisioned building a giant, exo-skeletal walking machine as a celebration of human skill. After a detour designing and building a different walking machine, the Mondo Spider, Jon assembled a team in 2010 and began working in earnest on Prosthesis. Over the next 5 years dozens of volunteers and engineering student teams helped Jon construct and test a single ⅔ scale leg, dubbed The Alpha Leg.

In 2016 Jon co-founded what is now ExoSapien Technologies with Aaron Fidler, Founder and then CEO of Furrion Ltd to bring the fictional backstory of mech racing to reality. Aaron and Furrion provided the resources needed to build Jon’s vision.

Through 2016 Prosthesis took shape in the eatART lab with the combined effort of the larger eatART community. Several members of the community joined the effort full time including Mondo Spider alum Ryan Johnston and Sam Meyer. The current Chief Operations Officer, Sam Carter initially took on the lead fabrication role for the build.

Prosthesis stood on its feet for the first time in January 2017 at CES in Las Vegas and then by November of that year Jon was able to walk the suit. So after nearly two years of fabrication, training and development it was established without question that the team had created a fully functional mech.

Since then the team has continued to work on increasing the capabilities of the mech with faster, more powerful movement and more responsive controls. In 2019 former eatART ED and 2010 Prosthesis student team alum Curtis Perrin joined the company. In the fall of 2020 pilot training experiences were offered publicly. These test pilots are helping to usher in the next phase of development; informing the design of 2nd generation mechs and setting the foundation of mech sports moving forward. Through this process we aim to inspire the creation of an entire sports league based on these huge, powerful, human piloted machines.

Prosthesis amplifies the pilots movements through a full body, on-board exo-skeletal interface. The machine has no computerized control system or gyros and is entirely dependent on the skill of the pilot to operate properly. This relationship reminds us, in a very immediate way, how our use of technology can convert small acts into movements of great consequence. We believe that in a world of ever increasing automation and virtualization, there is a renewed demand for authentic, challenging experiences that celebrate physical mastery and extend human potential using advanced technology.

Appearances
Prosthesis has been on display at CES 2017, Burning Man 2017 and CES 2018. It attended Maker Faire Bay Area 2018 & 2019 and Amazon RE:MARS in Las Vegas in 2019. It has also been featured in hundreds of articles and dozens of videos with combined views in the 10s of millions. In 2020 Prosthesis was awarded a Guinness World Record for Largest Tetrapod Exo-Skeleton.

Since 2010 Prosthesis has sponsored over a dozen student design and engineering projects. 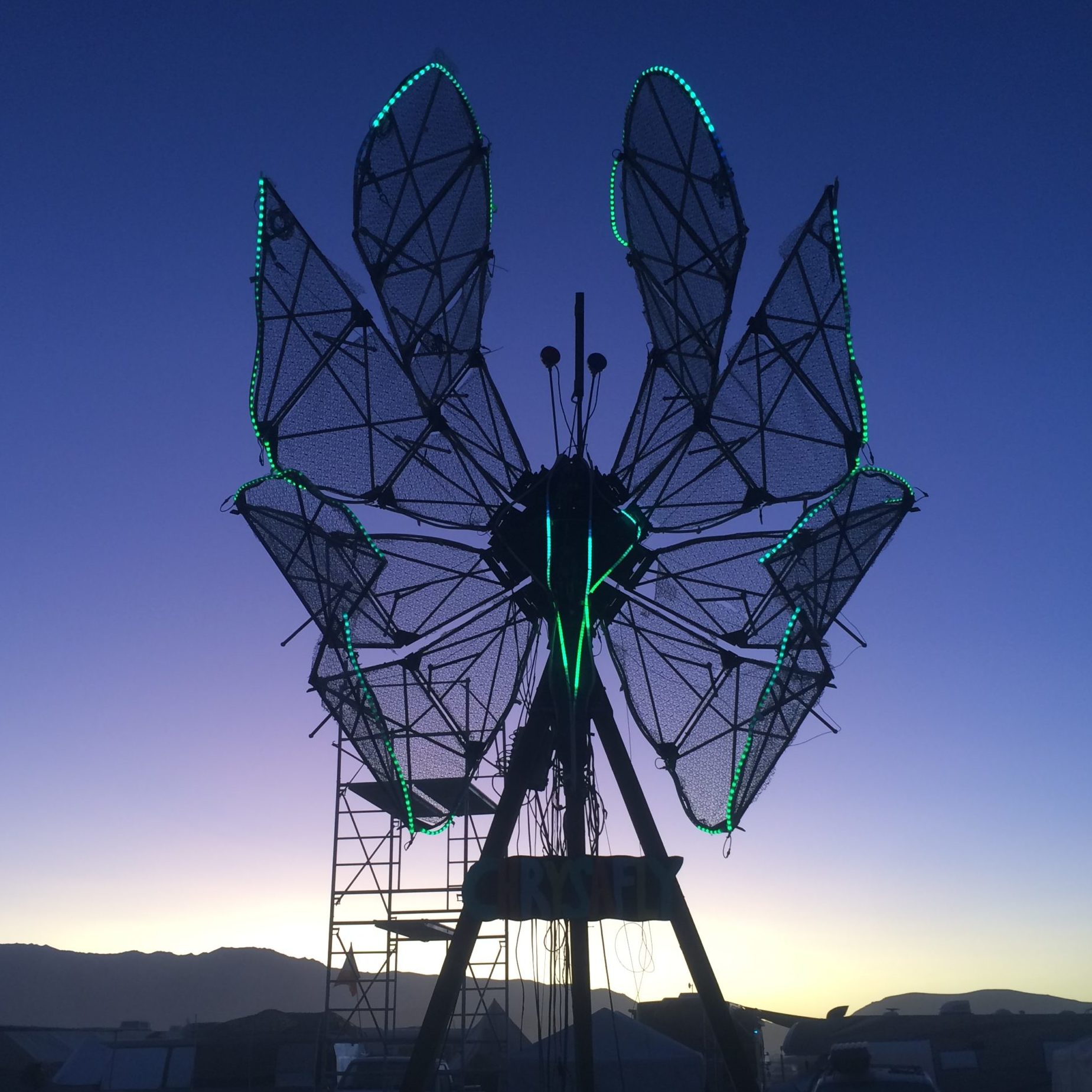 Chrysafly is a mechanical art piece that perpetually transforms from a chrysalis into a butterfly and back again. The wings are rimmed with LED’s and video’s are projection mapped onto them. This project was designed and built for Burn in the Forest 2019 (Vancouver’s regional Burning Man event) in line with the theme of Chrysalis. It subsequently went to Burning man, Sh’bang and Lumiere festivals. For lead artist Nico Woodward, Chrysafly began as a mental health project to get out of the dark places provoked by Vancouver winters. “Working on a project like this starts off with an idea, but then as more people get involved, it becomes more than the sum of it’s parts. Building connection and community.” This is a big reason why he chooses to build the projects he does; connection and community. The people who get involved become family.

“And then there is the butterfly, a most magical creature. The wings of the butterfly are already held inside the caterpillar, and as it breaks down its old self into goo the wings emerge ready to go. That process is amazing and teaches me that as we change and transform, we also have everything we need already right inside of us. So my organizing and healing work becomes about building the cocoon that can hold the goo so that the wings can emerge.” – Micah Hobbes Frazier. 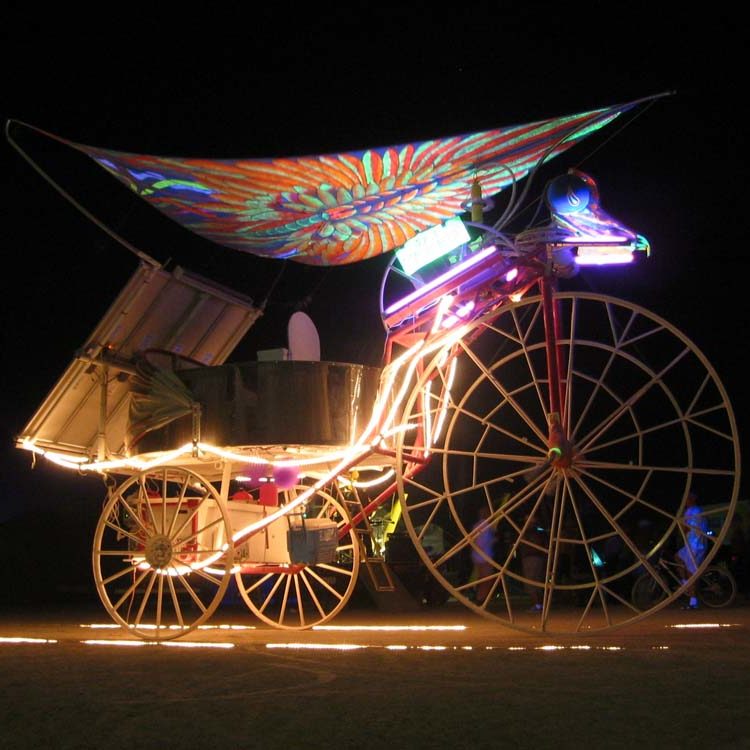 Daisy the Solar Powered Tricycle is an electric vehicle that was built in 2004 by inventor, fabricator, and Professor Bob Schneeveis. The project was designed to drive passengers around using exclusively solar power. At its maximum capacity, Daisy can carry four adults in its carriage plus a driver in the front. This 15ft tall art piece is the world’s largest solar powered tricycle.

In 2007 Daisy was acquired by one of eatART’s founders, Rob Cunningham and served as inspiration for the creation of the eatART foundation. Today, Daisy resides in Vancouver and is maintained by gBikes with support of eatART. As part of Daisy’s improvements, eatART collaborated with UBC Capstone Project in 2018 to improve Daisy’s drive train. Read the work they did here. 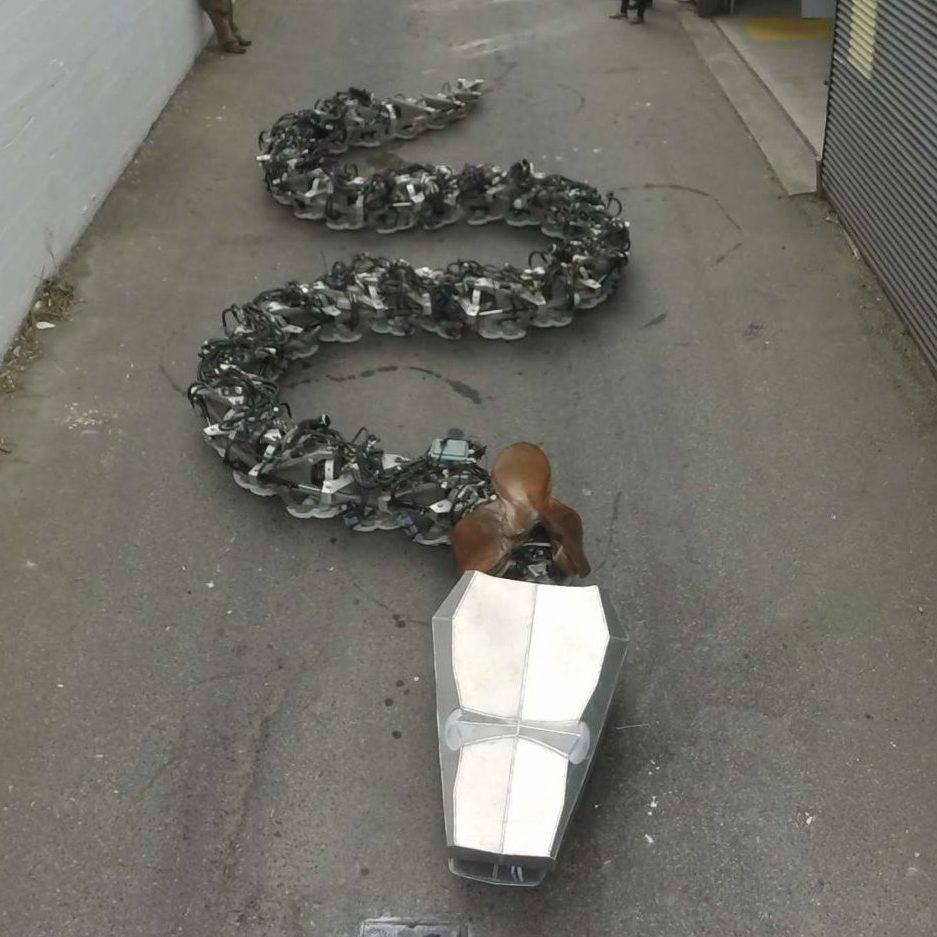 Due to climate change, a creature called the Titanoboa went extinct more than 60 million years ago. In 2011, it was brought back to life in the form of an electro-mechanical kinetic sculpture. It grew to real-life full-size in 2015: 50 feet of aluminum, lithium battery, micro-controllers, LEDs, and mind-boggling modes of propulsion. Its goal: to provoke discussion about climate change and energy use; to enable learning through engineering &amp; creation of a work of art.

The Titanoboa has slithered its way through numerous events and festivals. One can see it in action here or even hire it by contacting giantroboticsnake@gmail.com and witness the experience live. 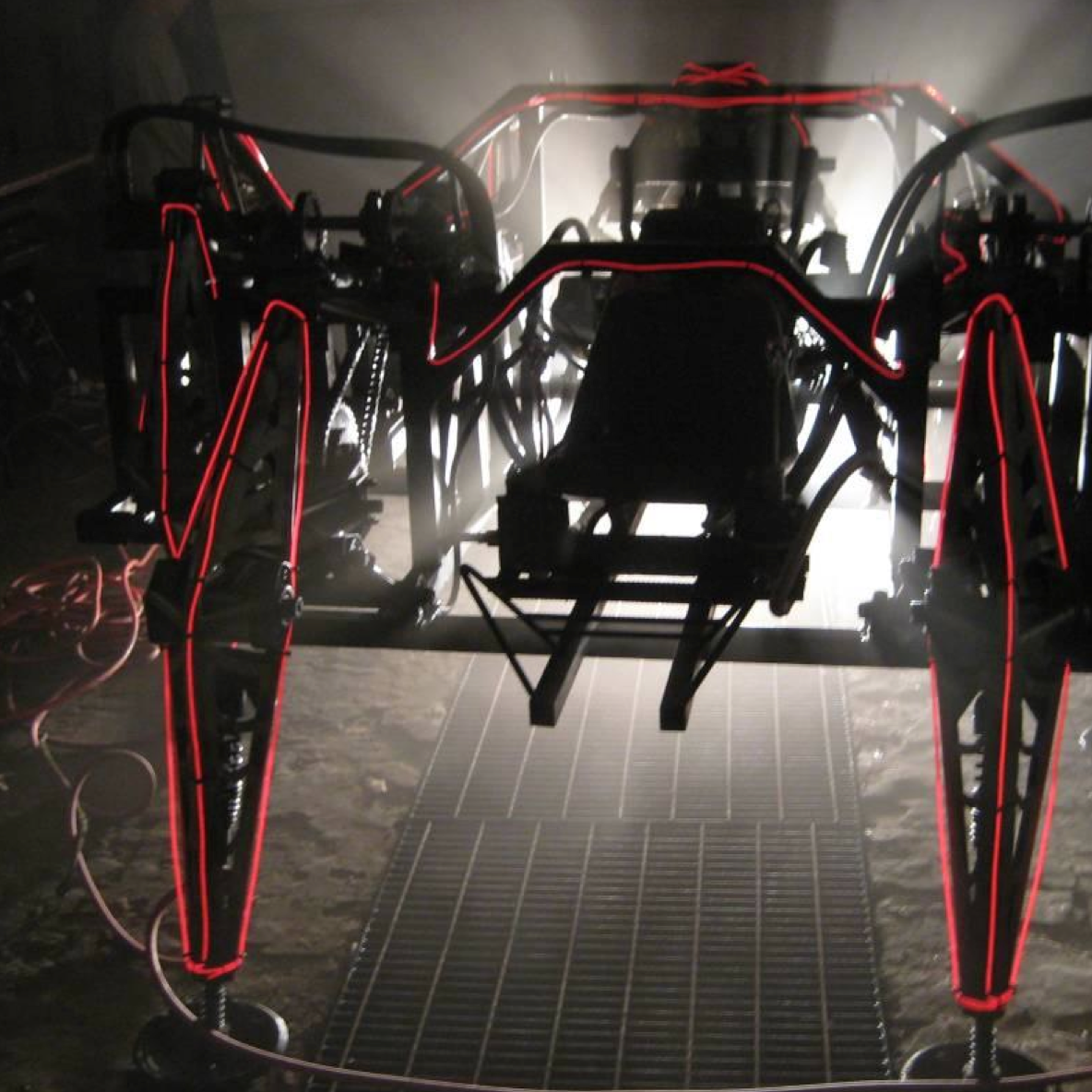 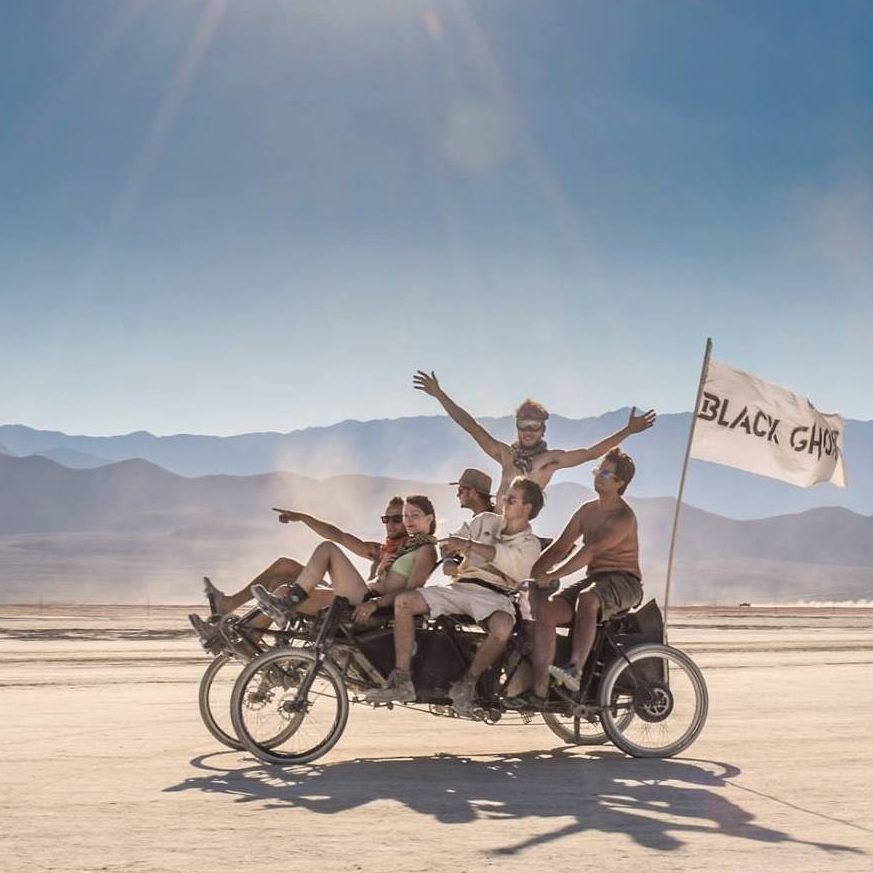 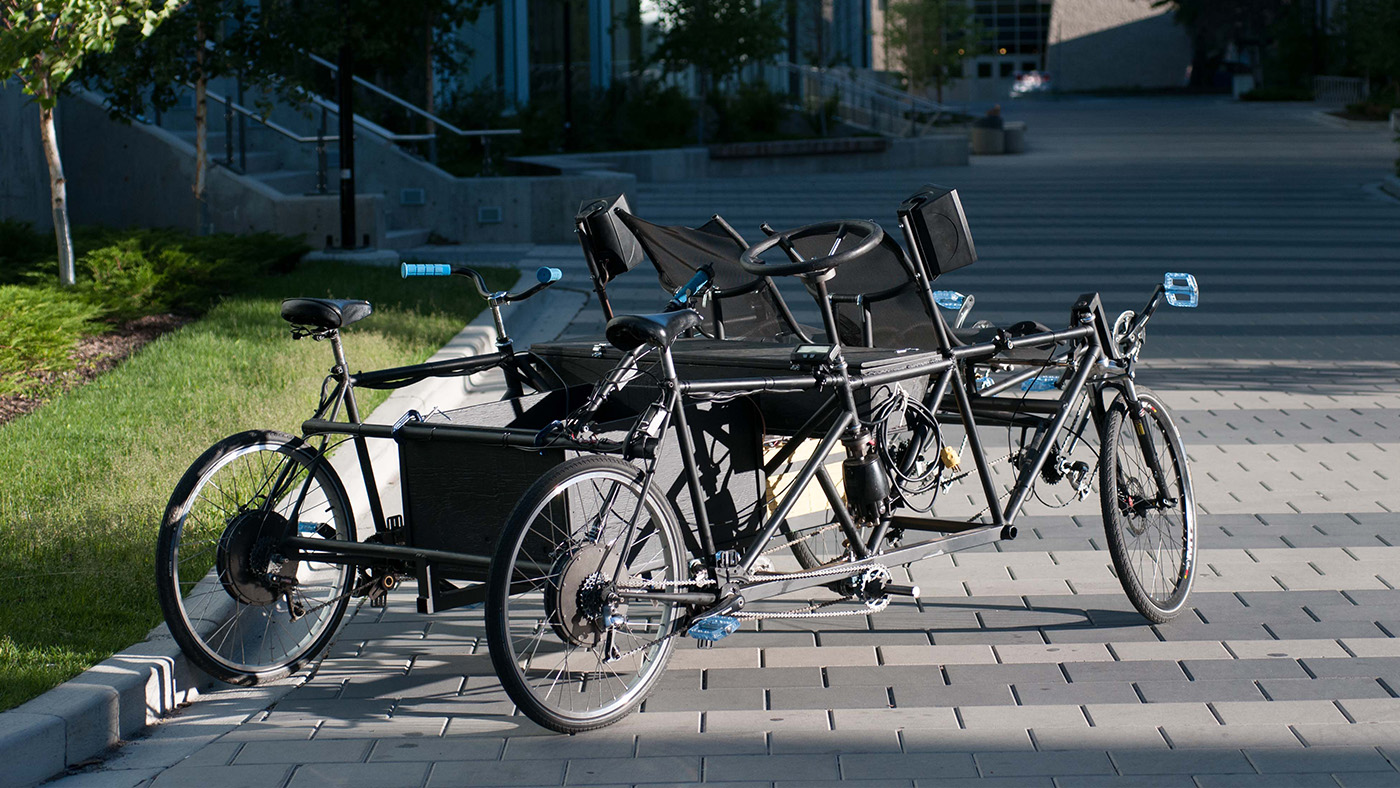 The Black Ghost Electric Bike Car is a mobile, highly interactive art piece which tightens the loop of electricity production and consumption. The project is lead by Curtis Perrin and built by Spencer Treffry, Sam Carter, Grant Harris, and Melody Copeman in 2011.

Black Ghost is named after an Amazonian fish: the Black Ghost Knifefish, the most energy-efficient electric fish on the planet. It is a mobile art piece, a mode of transportation, and a platform generating and storing power.  It allows riders to travel great distances using pedal power and optional electric assistance from hub motors built into the rear wheels. Furthermore, the Bike Car doubles as a pedal-powered electricity generation and storage station. At events the bike car allows participants, spectators and entertainers to connect with one another using energy as a medium for interaction and excitement!

It is hard to fathom our modern world without a stable energy supply. With energy’s ease of use and availability, we often forget the cost our consumption has has on our environment. By putting electricity production at a human scale, our hope is that the Black Ghost will excite and inspire others to learn more about sustainable and clean energy. 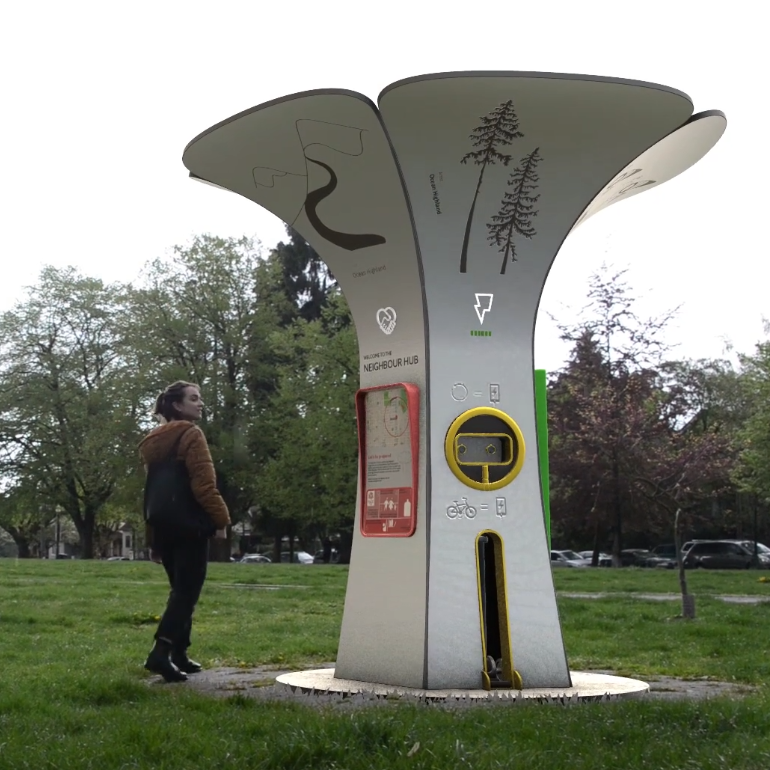 Neighbour Hubs (2019 – 2021) are created as gathering points for a local neighbourhood (in Victoria
and Vancouver, BC) with seating and multipurpose space. Each of the Neighbour Hubs
are co-created with the surrounding neighbourhood, and include elements of emergency
preparedness such as; solar charges, community bulletin board and neighbourhood
emergency kit. 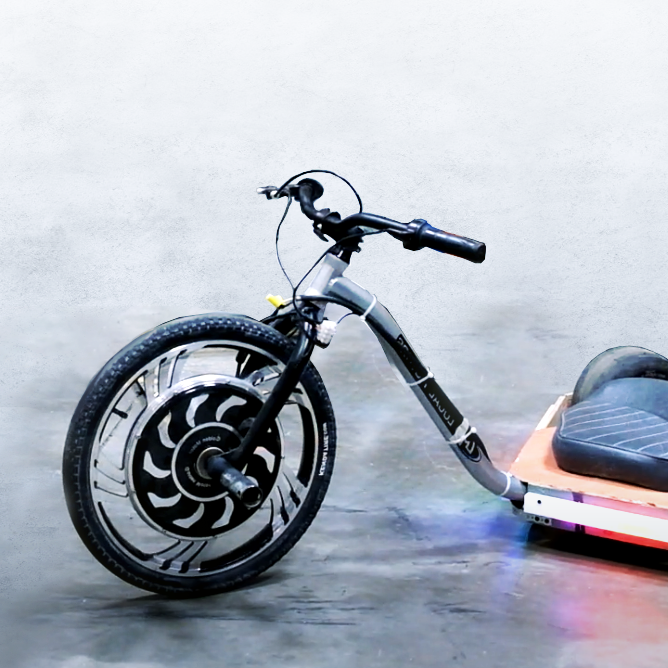 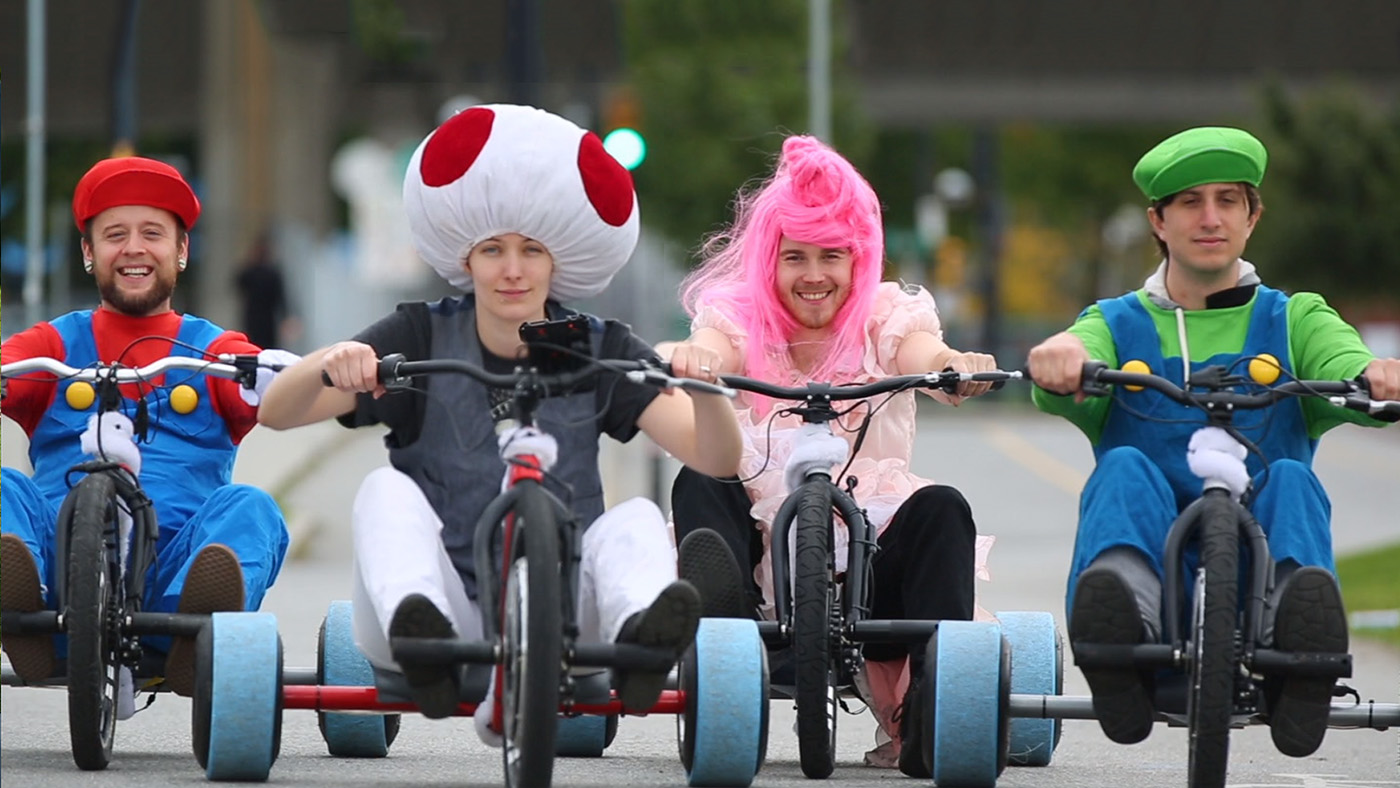 Rainbow Road Raceway is an interactive art experience. gBike and eatART collaborated to create this project: an adaptation of a classic video game, made into a real life-sized adventure.

Rainbow Road Raceway is comprised of the racetrack: a 160 meter-long, rainbow LED lit circuit; a large viewing platform in the shape of a castle that doubles as a dance floor: the blown-up copy of the 2013 “Another Castle;” and 7 electric trikes for one to race with! These vehicles respond to power-ups and obstacles; they speed up, they slow down and they even change colours depending on the encounter.

The project was successfully brought life at Burning Man in 2017. It is currently looking for more grounds to cover.

Check out the Kickstarter here.
Stay informed about events on Facebook here. 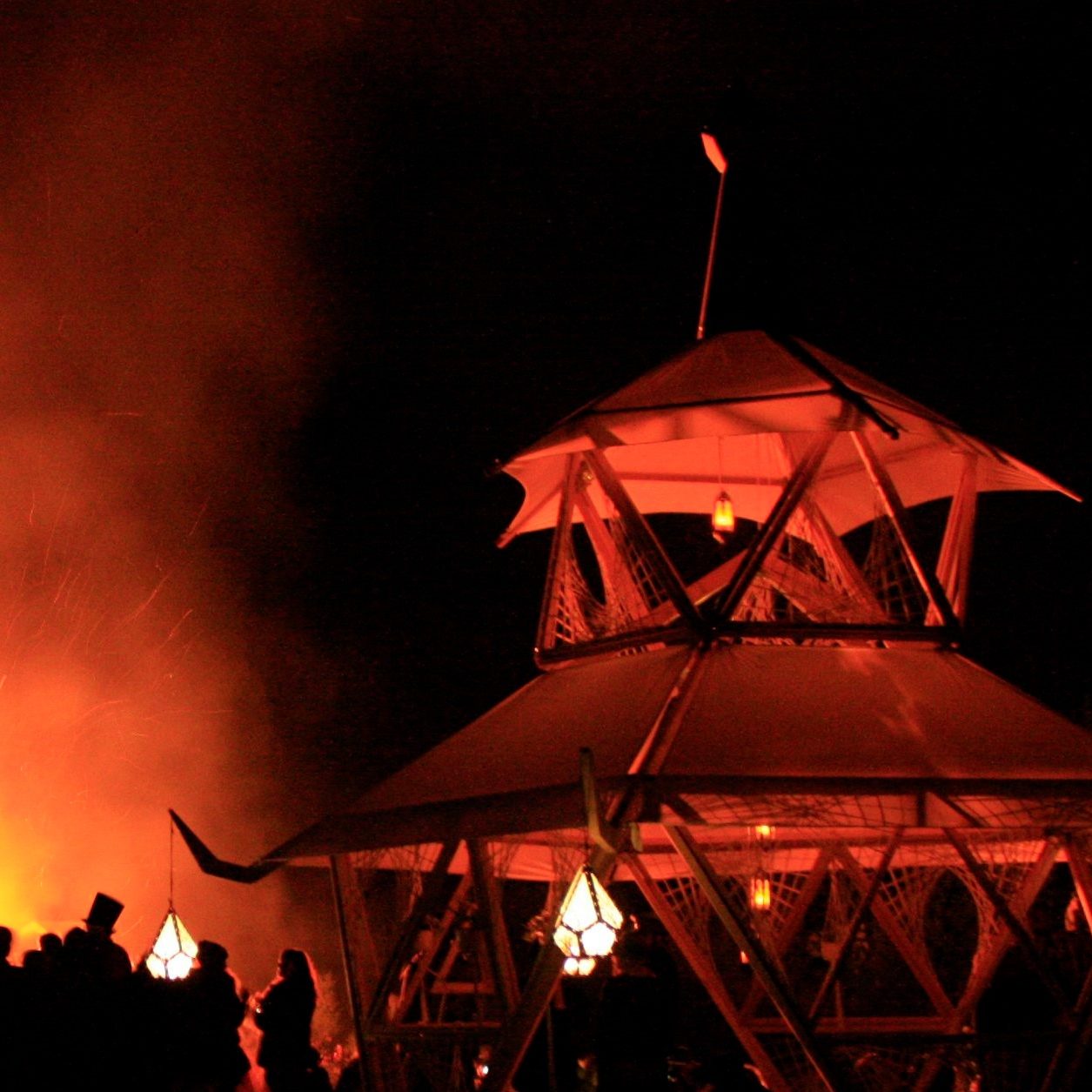 Icosohedral is a 12ft tall, illuminated geometric structure constructed from wood and LEDs. It was designed as the temple for Vancouver’s regional Burning Man event “Burn in the Forest” (BITF) in 2019. Unlike temples built elsewhere, the temples created for Burner events are not conceived “in recognition of any religion; it’s a neutral, non-denominational spiritual space where everyone can gather to share in the experience of remembering the past, honoring or cursing the present, and pondering the future to come.”* Temples are often burnt at the end of the festival to symbolize the letting go of the past. For the creator Joel Watson, the interpretation of Icosohedral is up to the viewer. 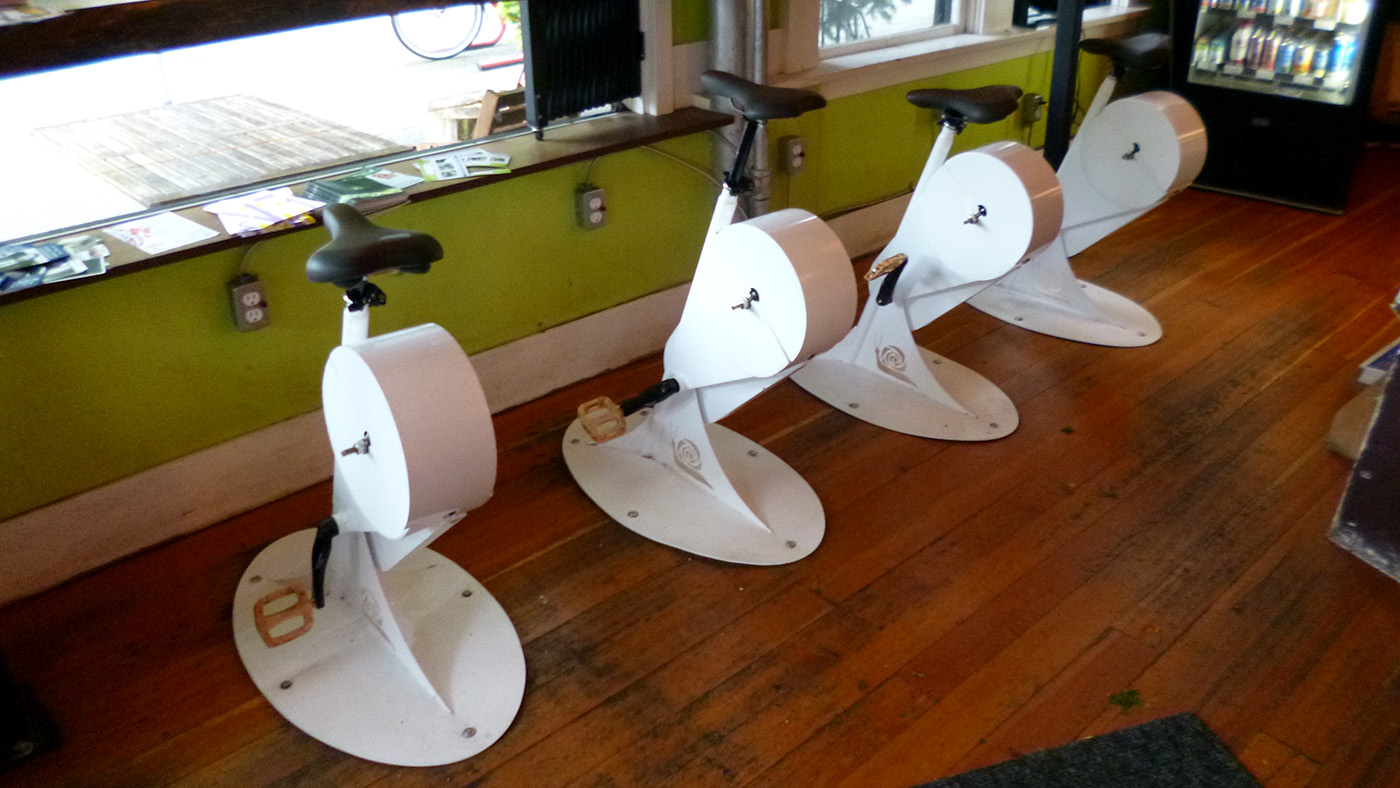 gBikes was contacted by Vancouver’s Wilder Snail to create a unique addition to the cafe, culminating in gBikes’ first permanent installation. Dubbed the ‘gSnails’, this
row of four electricity-generating stools allow riders to independently power their own laptops, cell phone chargers, or any other electrical device. An integrated computer system provides real time data into how their pedalling efforts are affecting their own energy production and consumption.

Currently residing at a school in Surrey, BC since 2018.